BioWare’s signature style is immediately felt: charismatic companions, a terrifying main villain, as well as a complex moral choice – a solid framework on which most of the studio’s games rest. You will go from an ordinary man to a Jedi master, get at your disposal the ship Ebon Hawk, collect your first lightsaber and fight with the powerful Darth Malak.

Keeping the best ideas of the first part, the creators of Star Wars: Knights of the Old Republic II: The Sith Lords brought several cardinal changes. Thanks to this, the game turned out to be deeper and more elaborate. For example, it became possible to influence your allies if you find the right approach to them. Influence not only opens up new threads in the dialogue, but it can also change the character’s character.

The plot is built around the Sith, capable of plunging the entire galaxy into chaos. On the shoulders of the player falls the responsibility of saving the world from their tyranny. As always, the choice is yours: you can fulfill the destiny or kill everyone in order to know the full power of the dark side of the Force and rule the galaxy unchallenged. 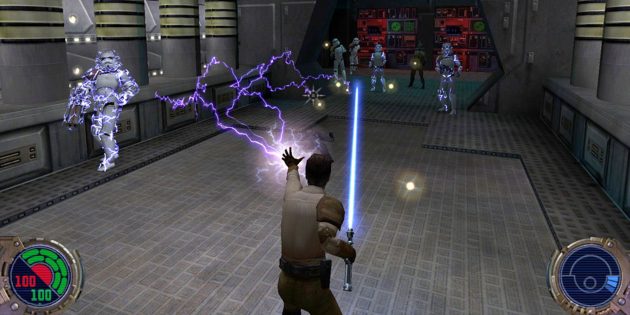 The game tells about the events that took place a few years after the Battle of Yavin IV – a very important date in the history of “Star Wars”, when the first “Death Star” was destroyed.

As Jedi exile Kyle Katarna, the player helps the New Republic finish off the remnants of the Imperial forces. Catharn left the order out of fear of defecting to the dark side and abandoned his lightsaber. But the Force has its own plans for the ex-Jedi.

Players will have to return the protagonist to the path of truth, find a lightsaber and fight the forces of the revived Empire, which is commanded by the dark Jedi Dessan. 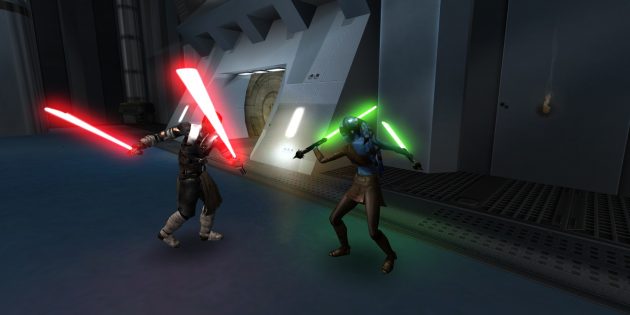 Another example of a successful sequel. Although Jedi Academy was not as large-scale as Jedi Outcast, it brought some fresh ideas to the series. In the role of a talented student of the Jedi Academy, Jadan Corra, the player finds himself in the center of events related to the resurrection of Mark Ragnos, a very old and powerful Sith.

Unlike the previous game, in Jedi Academy you can choose the side of the Force, the character and the lightsaber. Otherwise, it looks like its predecessor. You’ll visit places you’ve read about in books and see famous characters like Luke Skywalker.

A great gift for fans of the expanded universe of “Star Wars” from 2003.

The most distant from the canon story, but this is even a plus. The developers were free to do whatever they wanted. Thus was born the powerful Starkiller, a student of Darth Vader.

The game is set between the original trilogy and the prequels. In the midst of a crusade against the Jedi, Darth Vader finds a child sensitive to the Force and takes him to study in secret from Palpatine.

Star Wars: The Force Unleashed allows you to fully enjoy the power of the dark side: crush the enemy with a stone block or throw him at the wall with all his might. If this is not enough, you can always fry the enemy with lightning or send him into orbital flight with the help of a force push. Starkiller is not timid in front of major enemies. In a fit of anger, the young Sith effectively cuts the AT-ST at the first opportunity.

A bold game about the student Darth Vader will satisfy the hunger of fans who miss third-person action in the Star Wars universe, which are now very few.

Stormtroopers from “Star Wars” know everything, and jokes about their accuracy have already acquired a decent beard. But with their predecessors from the prequels, things are different.

Star Wars: Republic Commando is set during the Clone Wars. The player acts as the commander of the special tactical unit “Delta”. Clones in the game are no longer perceived as cannon fodder. They are full-fledged individuals who want to empathize.

The game received mixed reviews, but many players are still waiting for the continuation of the story of the Delta Squad.

Surely everyone dreamed of joining the battle on snow-covered Hoth or desert Geonosis, becoming a Master of Windu and demolishing the head of Django Fetta or shooting from the walking tanks of the Republic. All this can be done in Star Wars: Battlefront II.

Like Battlefront 2015, the game captivates with the opportunity to take part in large-scale events of the films and feel the atmosphere of “Star Wars”.

LEGO games have their own atmosphere and special charm. They are enthusiastically played by both adults and children. In addition, it is a great opportunity to visit familiar places from the movies.

LEGO Star Wars parody plays with the already known events of the films. The games in this series aren’t as serious as the others on this list, but that’s more of a plus. The opportunity to fight as Darth Vader shoulder to shoulder with Master Yoda is worth a lot.

Buy The Complete Saga on Steam →

Buy The Force Awakens on Steam →

After Star Wars: Knights of the Old Republic II: The Sith Lords, fans cherished the hope for the third part, but BioWare and EA decided otherwise. The game changed its name to Star Wars: The Old Republic and turned into an MMORPG. The gaming community rebelled, because everyone wanted a continuation of the series. The developers and publisher were relentless, but they did not want to anger the players. Therefore, the first fully voiced MMORPG was obtained, which managed to combine the pros and cons of the two genres.

Star Wars: The Old Republic has a grind and other annoying MMO mechanics. At the same time, the game pleases with a fascinating plot. Each class has its own story, companions and even ships. Game mechanics for different classes are also different. In addition, each class has a subclass, and the branching skill tree will allow the player to adjust the character to his style of play.

To fully use the possibilities of the game, you will have to look for companions, join guilds and participate in events, but this is not necessary. The pleasure of Star Wars: The Old Republic can be obtained by playing exclusively in the story campaign.

If you miss the Old Republic, feel free to run this game. It turned out to be full of events and interesting characters, and the content in it will be enough for more than a dozen sleepless nights.

There aren’t a lot of Star Wars strategies, although the setting is perfect for this genre. Star Wars: Empire at War is an undeservedly forgotten, but beloved by fans game. Events unfold between episodes III and V. The player chooses one of the opposing sides: the rebels or the Galactic Empire.

To win, you need to discover new technologies, build ships, plan attacks, and then unleash the full power of the imperial star destroyers on the rebel fleet. Better yet, destroy a pair of planets with a volley from the Death Star.

The wildest dreams of Star Wars fans became a reality in the large-scale Star Wars: Empire at War.